Congratulations to everyone who competed in the POWWR fundraiser tournament on Saturday November 18th. A great time was had by all, with tons of games, free t-shirts, a donation to the local school athletic program and a huge donation of food collected for the Foodbank of Waterloo Region. Thirty six players donated over 10 packed boxes of food, 223 lbs!!   Way to go gang!
Annie Crump won the 50/50 draw.   The “white t-shirt” team won the overall first place team position.
This is our third tournament of this type and seems to be a favourite. We had a number of returning players as well as new players from as far away as Belleville, Hamilton, Sauble, North York, Burlington and Dorchester.
You never need a partner to sign up with, just a desire to play, have fun, and meet new people. We place people on teams of six and you compete with each one of your teammates against other teams. At the end there is a “snowball” game, where you find three others that you have met at the tournament and play an extra game. We also try to provide referees for each match, as most tournaments only offer referees in the semi’s and finals.
What a great way to end the 2017 season!    Stay tuned for our next event.

Our Sponsor Hard at Work! 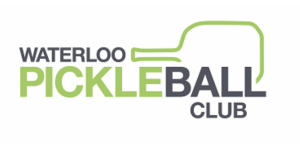